This pack contains two Heckler & Koch G3s with a large number of bodygroups, including some that allow them to be turned into different G3 variants, such as the G3A3, G3A4, G3SG1, and G3KA4. One model comes with a classic style trigger group, whilst the other has a more modern, polymer version. Aside from the trigger group, both models are identical.

Pretty much everything that moves on the real G3 is movable on these models, either through bodygroups, bones, or in most cases, both of those. There are a wide variety of stock and handguard bodygroups, ranging from the oldschool wooden versions to sliding stocks and railed handguards. The skins can be used to change the black polymer furniture to OD, and to change the magazine to look like the older version with the little raised 'ribs' along the side.

Due to the bodygroup limit, there are no options for any optics or attachments on the rails. Conveniently, the CS:GO Weapons pack BlooCobalt and I released a while ago for Garry's Mod contains all of the optics and attachments as separate props which can be used quite easily with these models. A link to this pack is below: 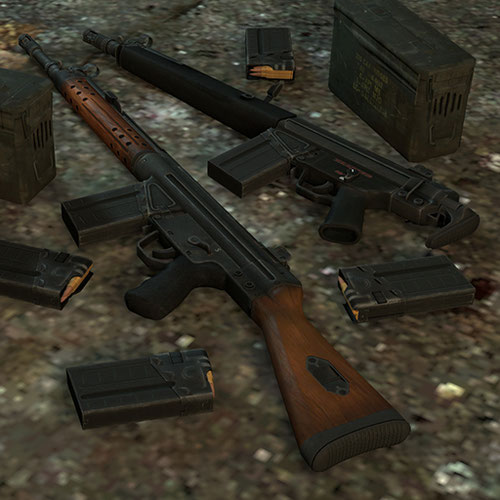