The first of many rebuilds of the Mass Effect and Resident Evil girls.

I intend to put the N7 armor on her over the next few days.

With that being said, a basic rundown:

Shiny new Daz body, built in a more realistic interpretation of Commander Jane Shepard: hardened military veteran whose not only one of the most elite of the Alliance elites, but also the first human to be accepted into the Spectre program. She is lean and taut, while still petite; she isn't bulging with muscle, but she has very little fat to spare (it all went into her breasts :mimiohmy:), revealing toned shoulders, thighs, and tummy. She spends extended stints running around in full armor, carrying two to three weapons on her back, performing countless rolls, vaults, and other acrobatics. And in her down time, she spends her time at countless night-clubs, where she is often one of the most popular escorts, particularly among the Vorcha and Krogan (or is that just in my personal head-canon? :mimiuneasy:)

Note that if you want to use any of her body flexes (such as the belly bulges), then you cannot use the bodygrouped outfits. You need to spawn in and attach the respective outfit models, and apply the same flexes to each piece. This is due to a limitation where bodygroups cannot have flexes.

Click here to see a video on how to attach the outfits. 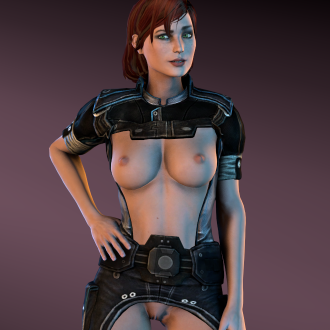