Scales are smaller, and skeletons are modified. If you were working on something, this version will definitely break it.

This is an enhanced version of Zelda's model from Hyrule Warriors. Collab between me and SediSocks.

Polycount has been increased in multiple areas, rigging improved all over, texture AO cleaned to allow additional bodygrouping, texture seams patched, and other general improvements over the original model.

** There are two versions of the model that can be loaded:**

zelda.mdl has a static dress for manual posing.

zelda_j.mdl has a fully jiggleboned dress that should (hopefully) work decently when exposed to light to moderate animation.

Unfortunately due to bone limits, I couldn't bodygroup the jiggle dress, so two models were necessary in order keep the dress jiggles toggleable separately from the other procedural bones.

Due to the complexity of the jigglebones (and Source's inadequacy concerning them) you may experience situations while animating where the jigglebones cause significant clipping. In an attempt to rectify these problems when encountered, [without having to bake procedural bones], each jigglebone has been given a non-jiggled parent, that will allow you to manipulate the mesh even while under the direct influence of the jigglebones. These special jiggle manipulator bones will hopefully keep all bad jigglebone situations under control.

Note that when using the jiggle manipulator bones, you may need to exaggerate the motion you want to apply, as the jiggles are also fighting to move the mesh at the same time.

I highly recommend using my control groups file, as there are a LOT of bones, and things can get confusing without proper bone identifications in the animation set editor.

Her weapons from Hyrule Warriors and the Light Arrows from Smash 4 are also included as usable props.

An IK rig is included, although any 2-spine bone rig will work.

Also included is an optional Control Groups file to allow SFM to identify and properly group all of Zelda's unique bones. The Control Groups file is the same as my other Hyrule Warriors submissions so you only need it once. Just use the one that is from the most recent release.

Special thanks to Chrrox, Twili, and RTB, who all contributed to making Hyrule Warriors porting possible

The Legend of Zelda is ©Nintendo, pls no sue 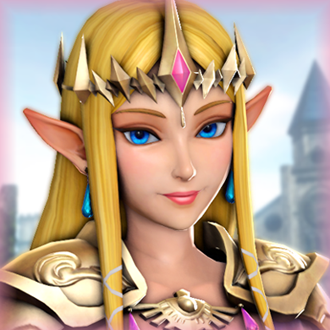