Skin Wolves from Total War Warhammer. Included is one model with body groups, several alternate skins, and a rig script. I'm not an expert or anything on this sort of stuff so if there's any issues with it I'm afraid I won't be of much help. To install just drop everything in the usermod folder.

Known Issues: -Some of the body groups don't appear to do anything. Either there's a slight difference in the models, none at all but are a duplicate for some reason, or somewhere along the line the porting messed up. --Sometimes there are very tiny details that are different but aren't visible normally. I don't know why this is a thing but it just is.

-Bones such as the jaw disappear when the rig is attached. --Right click an empty space in the animation set editor (default tab) and enable the "Show Hidden Controls" option. Credits to JawSFM for letting me know about this.

In addition to the regular versions, there are also options for variants without the skin draped over them. Makes them not really skin wolves but nice looking werewolves if you're looking for something more traditional. You can find these alternate versions as the last three skin options. 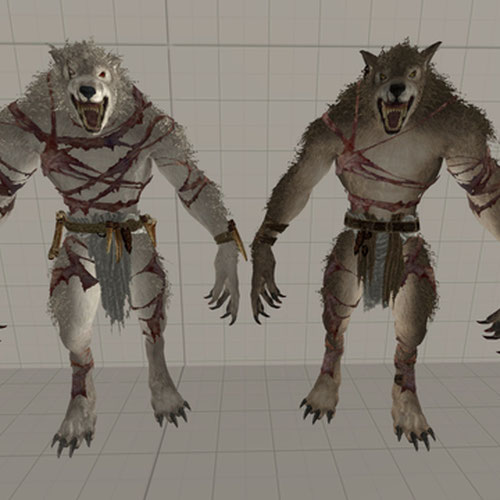