UPDATE: I've done my best to fix the ugly mesh so that her face and hair looks marginally better than it previously did, the thumbnail has been updated to reflect this.

Far as I'm aware this character didn't get the proportion adjustment of the other P3 protagonists(of which are actually from the dance games I think?) and this is just a meshmod.

I've had this model for awhile and while I don't hoard models I hate releasing models that nobody is going to use, and I know all of like 2 people that actually do Persona Content and their characters of interest are not related to this character but recently someone showed interest and instead of handing it off to them like it's some private model I'm uploading it.

Far as I know the skirt is a nightmare then again it could just be the placement and number of bones in the skirt. It's hack friendly so no need for shrinking aaaand it's anime styled where the pupil is separate from the whites but I've done a few facial flexes for a bit of 'Ease of Use' but nothing extensive so don't expect a ton of options.

Not sure how 'On Par' in quality it is compared with other Official P3 models, but it doesn't seem so bad that it doesn't match so it's usable. 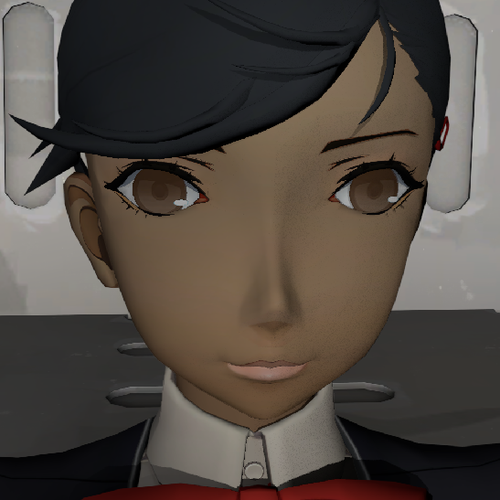