A little piece of Blender now in Source Filmmaker 2. This file contains Blender's "forest" studio light as a sky texture. The texture was also compiled in Hammer using VRAD3 to provide a lighting environment similar to what one would get in Blender.

Might be useful for comparisons between Blender's Eevee and Cycles engines to the Source 2 engine. Or just to pretend you are using Blender like everyone else when you are really using SFM2.

The sky texture is accessible in Hammer under "justasky_NinomaruTeien"

The SFM2 map is called "justa_NinomaruTeien.vmap"

As the lighting is baked using VRAD3, one has to record the lighting for SFM2. I included a session file where this is already done. The file is called "justa_Ninomaru Teien.dmx". It is located in the standard director for SFM2 sessions.

To record map lighting yourself (if you DON'T use the provided session file),load the map in SFM2. Then load the map within the game engine using the console. To open the console, press the tilde key, load the map by using the command "map maps/justa_NinomaruTeien.vmap". When the map is loaded in the engine window, press the record button in SFM2. It doesn't matter for how long you record and you can abort the recording as well. The baked direct lighting should now show up. You can get control of the baked lighting by adding it to the model overview using the option "Create Animation Sets for Existing Elements". Lastly, in the console, use the command "disconnect" to unload the map to not bog down SFM2. Once you save the session you won't have to do this again. When you reload the session the lighting will still be there. The same procedure works for all of HL:Alyx's maps as well. 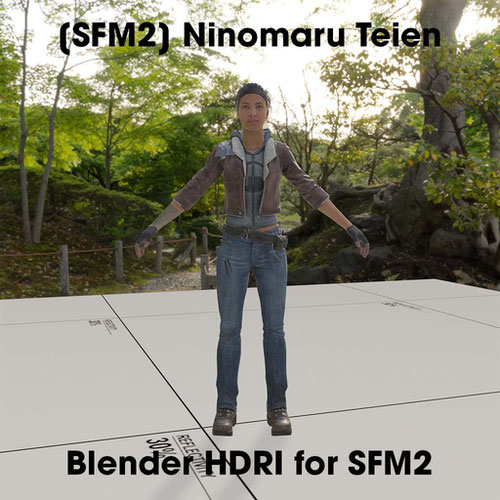